The Lyvennet Link - the parish magazine of Crosby Ravensworth and environs 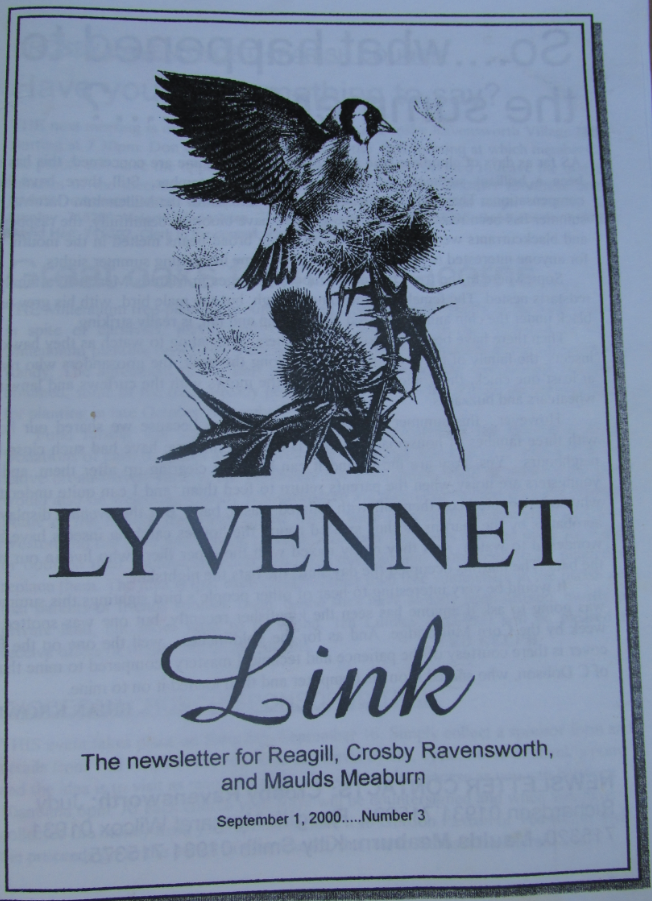 The parish of Crosby Ravensworth also comprises of the villages and hamlets of Maulds Meaburn and Reagill with its parish magazine 'The Lyvennet Link' also serving Kings Meaburn - the current editor being Nick Thomas.

The first and most obvious point to make is that our parish magazine (PM) is not 'church'. Whilst it does carry church news (dates of services, etc) it is not an ecclesiastical publication.

Therefore, if you have wondered why we get the 'Morland magazine', we don't, the 'North Westmorland News' is our church magazine.

The Lyvennet Link, which is often referred to as just the 'The LInk' is published monthly ten times a year (January and August being the two months when no edition is printed) and is subsidised by Crosby Ravensworth parish council. It is printed at the village school and delivered to every household within the parish ... free of charge.

History of 'The Lyvennet Link'

To start with 'The Link' wasn't called The Lyvennent Link, the very edition being called 'The Newsletter'

In 1999/2000, Philippa Dobson the then clerk to the Parish Council chatted with Kitty Smith about starting a Parish Newsletter. Brian Knowles, the retired editor of 'The Manchester Evening News', who lived at Lyvennet House in Maulds Meaburn, then produced the first newsletter in July 2000 - setting out his aims and hopes for the PM and also asking for ideas as to what the PM should be called.

In that first edition a name of 'Lyvennet Life' was suggested as 'a name common to all three villages', which at that time was Crosby Ravensworth, Maulds Meaburn and Reagill (Kings Meaburn not been included at this point) and somewhat amusingly added that: 'If you agree that Reagill could be said to be perched on the upper banks of the beck'.

However, Kitty Smith's suggestion of 'The Lyvennet Link' was chosen and Brian asked her if she could gather information for him for future editions. Kitty and others came up with a few ideas, there was a kid's corner with a few jokes and a few people provided recipes.

Obviously any events that were happening in the Parish (this included Kings Meaburn as that village was included in our Community plan) and news from the school were also included.

Sadly Brian lost his battle with cancer and this saw George Robson, (Beech Tree in Maulds Meaburn) take on the role of the editor. Unfortunately George suffered from ill health and this saw Nick Thomas then taking over, part editing for a few months and then totally at about issue 75 (2005).

George and his wife, Joyce, then did the printing and distribution, which Joyce kept up after George died and when this became too much for her she continued proof-reading until not long before her own death. Betsy Bell has also been another proof-reader for the PM.

From the very beginning the 'Lyvennet Link's' production values were of a high standard, something that you would expect when the editor came from such an illustrious background - but even in that first edition Brian made clear that he was encountering technical difficulties that were leaving him ... 'floundering'.

He was floundering with 'Microsoft Works' and setting up a scanner! Clearly even the best occasionally need some help!

Progress of the front cover -

As already mentioned the first edition wasn't called 'Lyvennet Link', but by the second edition it did carry the 'Lyvennet Link' name. On that second edition the front cover was fairly bland, just having the 'Lyvennet Link' name in type (scroll), however, things quickly progressed and by the third edition (title photo' above) the front cover now carried a picture which would then become the common theme. That 'theme' would be a picture of a bird or animal, which would then later be changed to that of a photograph of a local scene; this still being in use today.

In March 2020 the Covid-19 pandemic meant that the magazine could not be published and delivered in the normal way. Nick still produced the next issue (April - edition No. 198), but now in a digital (pdf) format and a number of people then used their extensive lists of e-mail contacts to ensure that it was distributed too as many people as possible.

With the edition for May 2020 following suit, it struck me that The Link could, maybe should, be available on-line and that my weather website was a possible vehicle for it. Preferably it would be a village website, but as such none exists. All future editions could then be held on this website - Nick still being able to digitalise the magazine even when it reverts back to a paper hard copy.

Below, is the very first edition of the Lyvennet Link and then all copies starting from April 2020 - our parish mag'.

**Obviously any views, opinions, etc contained within The Link are those of the contributor and not necessarily of MauldsMeaburnWeather**